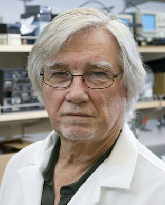 I received my Ph.D. in Exercise Physiology from Michigan State University, Masters from Universityof Iowa and BS from East Carolina University and am the Director of the Neuromuscular Research Laboratory and Distinguished Professor of the Departments of Integrative Biology and Physiology, Neurobiology and Neurosurgery and a member of the Brain Research Institute at University of California, Los Angeles (UCLA).  I have been teaching and conducting research at UCLA for over 40 years. My research is focused on how the neural networks in the lumbar spinal cord of mammals, including humans, regain control of standing, stepping and voluntary control of fine movements after paralysis, and how can these motor functions be modified by chronically imposing activity-dependent interventions after spinal cord injury. Many of these projects are being performed with national and international collaborators and I have published over 460 peer-reviewed papers on topics in this area. After having demonstrated the feasibility of using the neural modulatory techniques in human subject with complete paralysis, two things have become urgent at this point in terms of realizing interventions that can benefit the moderately and severely spinally injured individuals. One is to significantly improve the technology of electrical stimulation and identify optimal pharmacological drugs that can facilitate recovery of motor function when combined with training. The second point of urgency is to understand more clearly the mechanisms by which recovery of motor and autonomic function occurs following complete paralysis. After spending considerable time in attempting to identify the interneurons that mediate remarkably normal coordinated motor task after complete paralysis, we are even more convinced of the importance of being able to identify the distribution of interneurons and the type of interneurons with respect to their neurotransmitter’s that generate different motor tasks. Given our ability to control the distribution of current with a wide range of complicated designs of micro arrays and patterns of stimulation, we are reasonably certain that we can achieve a much more adaptable and highly successful modulatory methodology that will enable us to focus the modulation on specific population of interneurons. Identification of the sites and types of interneurons that mediates the final decisions made in the spinal cord in regards to how different motor pools and thus muscles are coordinated. This is a process of continuing technical development. I began studying this issue of interneurons identity that generates central pattern generation four decades ago and given what we know today and the potential of capitalizing on spinal circuitry in achieving significant recovery of function, this question is even more urgent today.

The spinal networks that generate stepping and standing have the capability to learn a specific motor tasks that is trained for that task. It can also “forget” how to perform this task if training is not sustained. The concept of spinal learning was not readily accepted but after repeated demonstrations of this phenomenon in my lab as well as others, it is now generally recognized that this phenomenon is a fundamental basis of rehabilitative following a motor deficit. We have learned that one of the mechanisms underlying spinal learning is a reorganization of the spinal networks that activate stepping include a reduction in the number of interneurons that are activated for a given motor tasks that are trained to step compared to those that are untrained.

Epidural stimulation and monoaminergic pharmacological modulation of the spinal networks can be used as an intervention to recover stepping and standing when combined with training of that task. These studies have also led to the concept of using neuromodulation of spinal networks to enable rather than induce stepping or standing. This allows movements to be performed with a selected spinal stimulation parameter when the intervention is combined with the proprioception and cutaneous input associated with standing and stepping to the spinal cord. Subsequently we observed that supraspinal input can be recovered in human subjects after complete paralysis and this recovered capability enables voluntary movements.

Developed technical devices and methodologies to enable noninvasive neuromodulation to regain assisted stepping and voluntary control of the lower limbs in SCI subjects having been completely paralyzed for more than one year. We first demonstrated the capability to actually induce a locomotor pattern of stepping in uninjured individuals when placed in a gravity neutral position. The novel aspect of these approaches is that we can accomplish these effects using a method of electrical transcutaneous stimulation, and induce further improvement with a monoaminergic drug, buspirone. This capability greatly expands the options and feasibility of using neuromodulatory interventions to regain motor and even autonomic functions not previously observed after complete paralysis. In addition this noninvasive approach will be less than one tenth the cost of the surgically implanted epidural electrodes and stimulator device. Further, we combined the transcutaneous stimulation treatments over a period of three weeks, five days per week with training in the EKSO exoskeleton we demonstrated that the subject learned to reduce the work necessary for the robot to generate stepping with his own neuromuscular efforts. This approach could be the beginning of merging state-of-the-art robotic control with neuromodulatory interventions to progressively accomplish improved mobility as well as improvements of autonomic physiological systems.